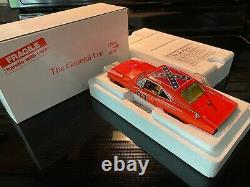 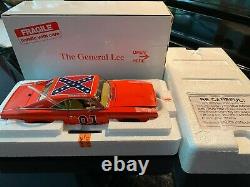 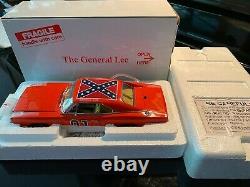 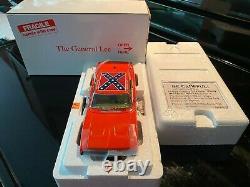 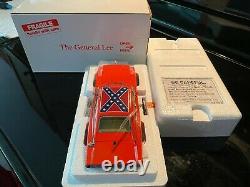 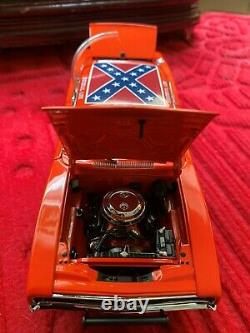 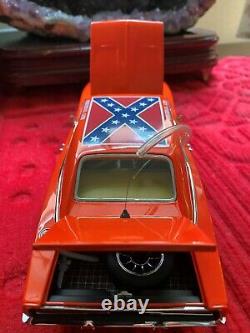 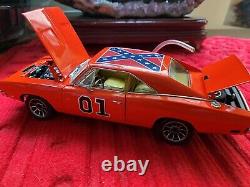 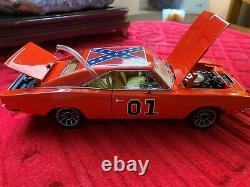 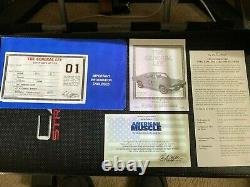 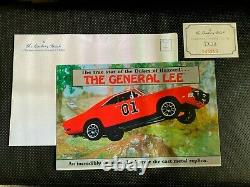 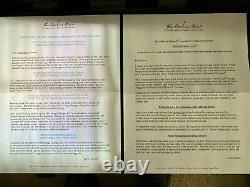 Danbury Mint Diecast of The General Lee "01" car 1:24 Scale is Brand New! A 1969 Dodge R/T Charger or, as Boss Hogg used to call it, "That Orange Clunker Car ". My photos are not professional, but there is nothing to hide here, as this car comes with everything - UNPRECEDENTED QUALITY AND DETAIL THAT'S RARELY MADE AVAILABLE!

A definitive diecast model of this highly regarded automobile. Both the diecast model and the original box are in brand new condition. The General Lee is the Dodge Charger driven by the Duke cousins Bo and Luke in the hit television series The Dukes of Hazzard.

It is known for the chases and stunts, especially high jumps, in almost every episode, and for having the doors welded shut, leaving the Dukes to climb in and out through the windows. The car appears in every episode but one ("Mary Kaye's Baby"). The car's name is a reference to the Confederate General Robert E.

Lee and it bears a Confederate naval jack on its roof and has a horn which plays the melody from the first line of the song "Dixie". The idea for the General Lee was developed from the bootlegger Jerry Rushing's car, which was named for Lee's favorite horse, Traveler. Traveler was also the name of the car in Moon Runners, the 1975 movie precursor to The Dukes of Hazzard.

Although the estimated number of General Lees used varies from different sources, according to Ben Jones ("Cooter" in the show), as well as builders involved with the show, 256 General Lees were used to film the series. Others claim about 321 were used in the series. Approximately seventeen still exist in various states of repair.

On average, more than one General Lee was used up per show. When filming a jump, anywhere from 500 to 1,000 pounds of sand bags or concrete ballast was placed in the trunk to prevent the car from nosing over.

Later in the series the mechanics would raise the front end of the car to keep it from scraping against the ramp causing it to lose speed, thereby providing a cushion for the driver upon landing. Stunt drivers report enjoying the flights but hating the landings. Despite the ballast, the landing attitude of the car was somewhat unpredictable, resulting in moderate to extremely violent forces, depending on how it landed. On many of the jumps the cars bent upon impact. All cars used in large jumps were immediately retired due to structural damage.

From 1979 to 1985, 1968 and 1969 model-year Chargers were sourced and converted to General Lee specifications. Despite popular belief, no 1970 models were used, according to all builders involved over the years. Obtaining cars was not a problem until later years. By that time, the car was the star of the show and Warner Brothers moved building of the cars in house to keep the cars consistent in appearance. Later in the show's run, when it got too hard and/or expensive to continue procuring more Chargers, the producers started using more'jump footage' from previous episodes. In the final season radio-controlled miniatures were occasionally used to the chagrin of several cast members. The 2001 Danbury Mint General Lee is a very special Dukes of Hazzard collectible. The Danbury Mint is the world leader in the design and development of fine collectibles including Christmas Ornaments, Fine Jewelry, Coins, and Sports Commemoratives.

They produce extremely highly detailed diecast cars of the highest quality. In 2007, they decided to tackle our favorite car, the General Lee.

They did their research and proved that they have a great deal of respect for the Dukes and its star car. The General Lee Size is 8.5"x3"x3.

Danbury Mint 1969 Dodge R/T Charger The General Lee 124" is in sale since Sunday, June 13, 2021. This item is in the category "Toys & Hobbies\Diecast & Toy Vehicles\Cars, Trucks & Vans\Contemporary Manufacture". The seller is "i1i4147" and is located in Bothell, Washington. This item can be shipped to United States.